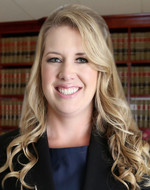 Anna Cathleen Howard grew up in San Diego and Los Angeles, and she obtained her bachelor’s degree at University of Southern California. As a student there, she served on the Academic Honors Society and mentored at-risk youth in the South Central Los Angeles community. Anna then attended University of San Diego’s School of Law, graduating in 2011. While in law school, Anna volunteered with an immigration clinic, clerked for Federal Judge Michael Anello, and interned at the Public Defender’s office. After graduation, Anna worked at several law firms, focusing on security transactions and assisted reproduction rights, before starting her own firm. Anna lives and practices law in Carlsbad, California. She spends her free time with her close-knit family, swimming, body surfing, and volunteering.

Dividing Frozen Embryos
Play
As of 2002, CDC said 12% of women and their Infertility treatments and Assisted Reproductive Technology have made great strides in the recent past. But these advances have led to several legal issues in the U.S. Viewers of this program will get a primer about this...